Bosses You Could Run Into

Be careful! Not all bosses function the same! Use this info to your advantage!

In this page, you'll learn all about the different types of bosses you'll encounter during your service in the workforce. If you would like to skip to an certain article, click a link on the list below. 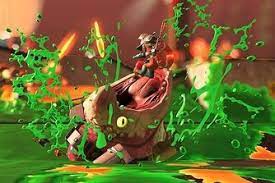 The Maws is a boss salmonid that can swim through the floor, creating a small path behind themselves. They usually indicate where they are before striking, of which is a little, small buoy. When about to strike, they emit a small green circle the reveals the attack radius.


Way(s) To Defeat a Maws:
- Throwing a bomb into the radius before the attack
- Attacking it normally until it defeated 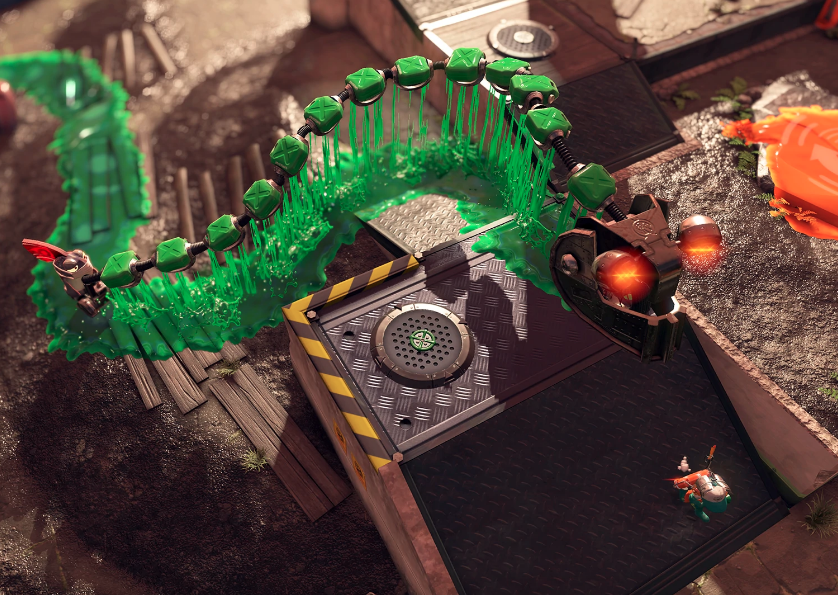 A Steeleel is an "eel", which a metallic snake controlled by a salmonid on the other end of the line. This enemy will target one teammate and if the person targetted by the Steeleel dies, then the nearest player will now be targetted. Their long bodies are hard to manuever around, and can easily corner you.


Way(s) To Defeat a Steeleel:
- Attacking the "tail" 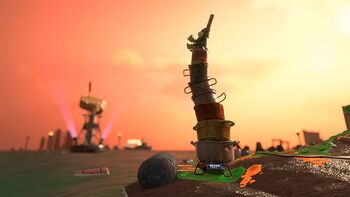 Stingers are a sniper tower that has an incredibly powerful ray of ink that can go through walls. They are made of an entire tower of pots. They mainly focus on one person the entire time they are active. When the player they target dies, they switch targets.


Way(s) To Defeat a Stinger:
- Shooting down the tower of pots it sits on 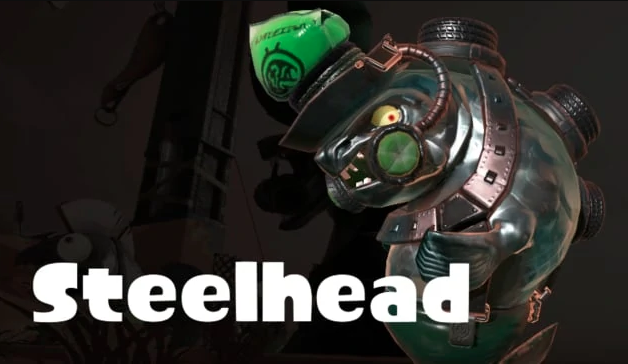 Steelheads are salmonids that have a completely ink-proof suit that disables them to take any damage. They blow huge sacs of ink from their heads, and when lauched, it lands on the floor and detonates a few seconds after.


Way(s) To Defeat a Steelhead:
- Attacking the ink sac on the head

Flyfish are a floating machines that shoot missles from the trashcans it has on their sides. Each bin fires 4 missles each, making it a total of 8 missles. Those missles then target the players, and when they continue to add up, there'll be trouble.


Way(s) To Defeat a Flyfish:
- Using 2 bombs, either by yourself or with another person, to throw them into the bins 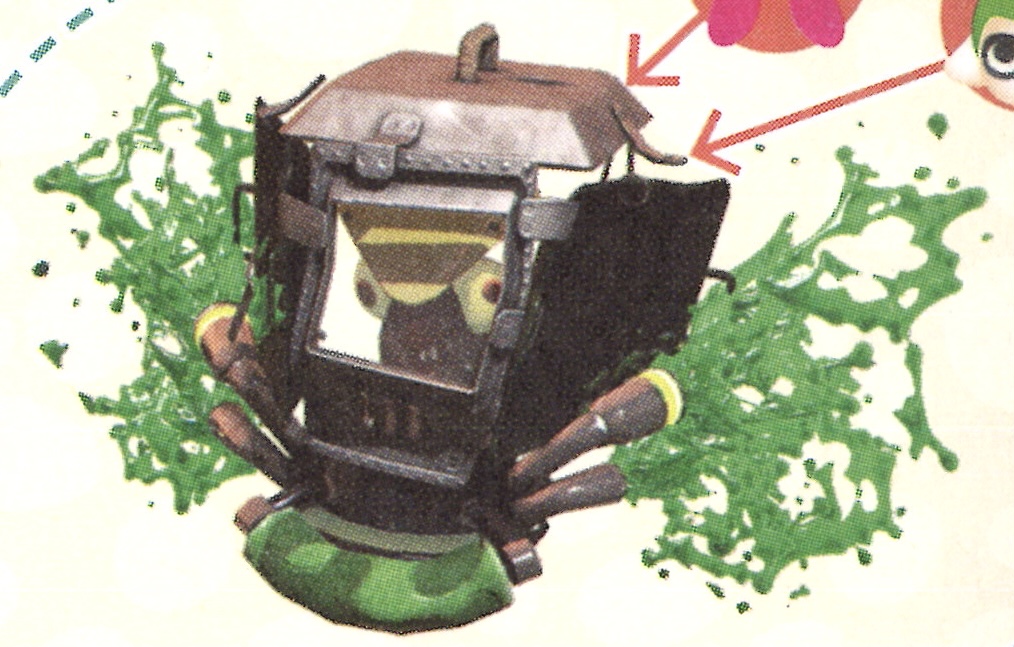 Scrappers are little salmonids that drive around in a little broken-down car. They follow people and run into them until splatted. The car acts like armor, negating any fire that is shot towards the car.


Way(s) to Defeat a Scrapper:
- Shooting the front enough to stun, then shooting the exposed backside 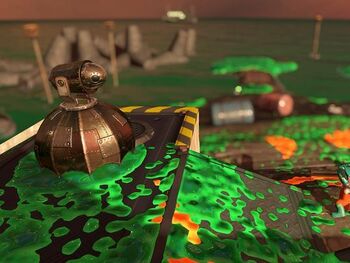 Drizzlers are salmonids that can fly through the air with an umbrella. They usually linger around on the floor, covering themselves with their own umbrella, until they shoot a missle. When they shoot the missle, they become exposed, and after a few seconds, the missle will shoot upwards, causing a harmful rain against players.


Way(s) to Defeat a Drizzler:
- Shoot the missle back towards them
- Attacking when exposed 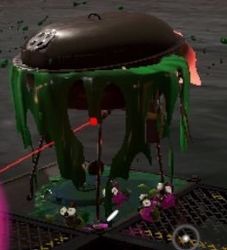 Grillers are tricky to deal with. You can only encounter them on 'griller' rounds. Grillers are a literal grill with a waterfall of green ink falling from the sides. Walking under or coming within contact of the ink is instakill. They only target one person while they are alive, and similar enough to stingers, scrappers and maws, they target someone else immediately after the target dies, or after not being able to splat the target after 30 seconds. They also have high mobility speed, making it harder to attack.


Way(s) to Defeat a Griller:
- Attacking the tail, and attacking when stunned 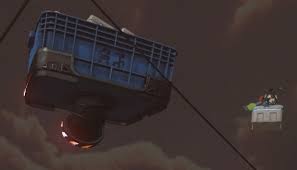 The mothership isn't the one you're trying to defeat, however. It's the flying carriers, called Chinooks, that carry boxes that are flown down onto the ground. The boxes contain a few enemy salmonids that spawn while the box is there. The chinooks don't attack, but they are the main focus. The mothership can move onto the egg basket, providing a problem when the main focus is something completely different.


Way(s) to Defeat a Chinook:
- Attacking when close enough to the ground 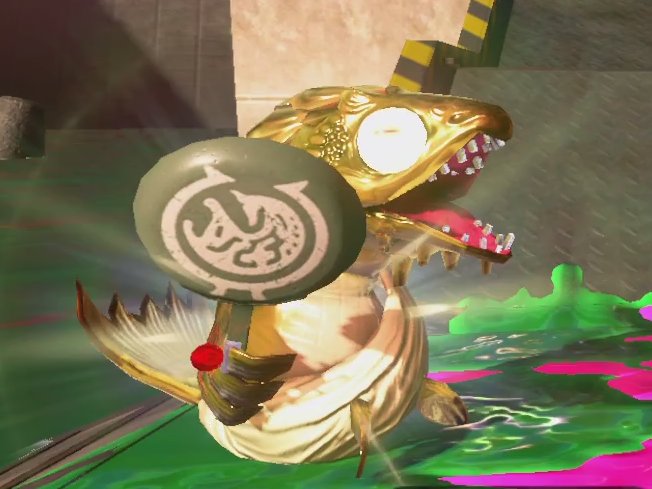 This salmonid actually comes in 3 forms. One during the fog, one during the gusher round, and one during the rush round. During the fog, they will randomly appear, and upon defeating, spawns 1, 3, 5 or 8 eggs. In the gusher, you must find them on the map and fire at them. When enough damage is dealt, it drops one egg and repeats until defeated and drops 3 eggs (drops a total of 16 eggs if all are retrieved). Lastly, during the rush round, they just appear among the other salmonids, and upon defeating spawns 3 eggs, but all spread out in a radius.


Way(s) to Defeat a Goldie:
- There is no definite way. Only matters on what type of round.

[Click Here to Go Back to Home] [General Knowledge] [Maps]